Palm wine is a beverage consumed predominantly in Asia, South America, the Caribbean and parts of Africa. Historically, palm wine has been a staple beverage in many communities having deeper roots in certain cultures. It is produced from the sap of palm trees such as palmyra, oil palm, coconut and date palms. When freshly tapped, palm wine has little to no alcoholic content and is said to offer several nutritional benefits to the human body. Once fermented, alcohol levels rise and may even exceed levels found in beer.

Production and Consumption
Palm wine production by local farmers is a regular source of household income. A tapper, extracts and collects the sap by climbing up the tree trunk using rudimentary equipment such as a raffia twine. The sap is extracted by cutting and drilling a hole into the top part of the tree trunk, where the sap slowly seeps out into a collection device such as a gourd or container.

The fresh sap is sweet and white in color with low alcoholic content but becomes sour after fermentation. An alternative method of extracting palm wine is by felling the entire tree. This is considered a safer method and considered to produce higher quality wine. However, it is more destructive and produces smaller quantities of sap that barely flows after 2 – 3 weeks. To increase the flow of sap, heat in the form of fire is typically applied at the cut end of the felled trunk. 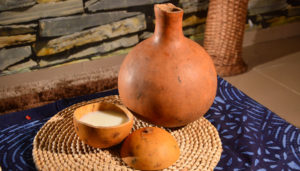 Fermentation of tapped palm wine begins naturally immediately after collection. The quality and alcohol content of extracted palm wine is affected but not limited to species of the tree, time of the year, soil type and time of day at harvest. The fermentation process is catalyzed by the presence of natural yeast spores in the air, sap, or residue in the collecting gourd. Within 2 hours into the fermentation process, the alcohol content can rise up to about 4%. If consumed at this stage, the wine is a sweet, white and mildly intoxicating beverage with a shelf life of about 24 hours. Longer fermentation time generates a stronger, more alcoholic, white, sour beverage, which is preferred by most people. Fermentation beyond a certain threshold can however result in the production of vinegar.

Uses of Palm Wine
Palm wine plays an integral role in some cultures in West Africa, dating back to precolonial times. Societies in southern Nigeria, use palm wine as an essential drink at traditional ceremonies such as weddings, wrestling matches and other local gatherings.

When distilled, palm wine can be used to produce liquor-like drinks with alcohol content up to about 40%. The names differ from region to region. It is called ogogoro in Nigeria, akpeteshi or burukutu in Ghana, lambanog in the Philippines, lagmi in Tunisia, koutoukou in Cote d’Ivoire, chang’aa in parts of Kenya, ubusulu in South Africa and in Lagos city Eko ile Nigeria, its called “EMU OGURO”

The distilled gin can also be used as an antiseptic for treating lacerations and stop heavy bleeding from injuries. 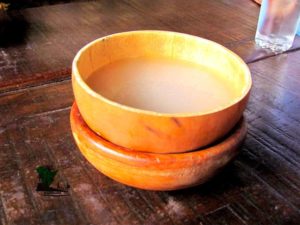 Benefits
Palm wine is a natural nutritious drink full of amino acids, potassium, zinc, magnesium, iron and vitamin B complex. Below is a list of a few documented health benefits of palm wine: