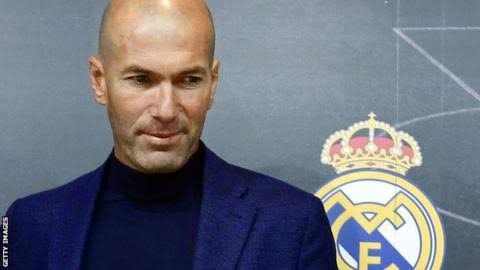 Former Real Manager Zinedine Zidane has been officially resigned by the club after the club held a board meeting on Monday evening to discuss the ongoing issues.

MySportDab reports the Frenchman has signed a new deal with Los Blancos until 2022.

A statement on the club’s website reads: “The board of directors of Real Madrid, meeting today, Monday, March 11, 2019, has decided to terminate the contract that linked Santiago Solari with the club as coach of the first team.

“Real Madrid appreciates the work done by Santiago Solari and the commitment and loyalty he has always shown to this institution.

“The board of directors has also agreed the appointment of Zinedine Zidane as the new coach of Real Madrid with immediate incorporation for the remainder of the season and the next three – until June 30, 2022.

“The president of Real Madrid will appear today with Zinedine Zidane before the media at 8:00pm(CET) in the press room of the Santiago Bernabeu stadium.”